MOSCOW, April 7 (Xinhua) -- China and Russia will work together to deepen their comprehensive strategic partnership in order to promote the development of both countries and contribute to a lasting world peace. 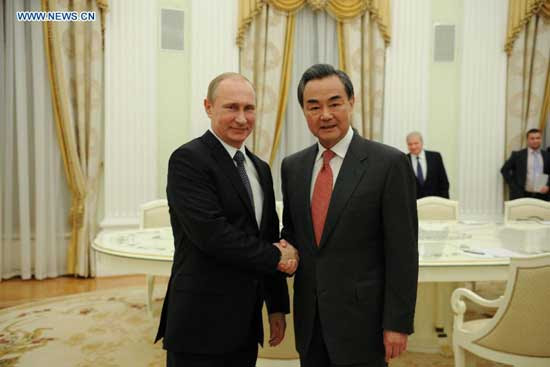 Russian President Vladimir Putin (L) meets with visiting Chinese Foreign Minister Wang Yi in Moscow, Russia, on April 7, 2015. China and Russia will work together to deepen their comprehensive strategic partnership in order to promote the development of both countries and contribute to a lasting world peace. (Xinhua/Dai Tianfang)

Russian President Vladimir Putin on Tuesday met here with visiting Chinese Foreign Minister Wang Yi and said that Russia- China relations are at an unprecedentedly high level, and the cooperation between the two countries has become the most important stable factor in today's world.

Putin said he expected Chinese President Xi Jinping to come to Moscow for the celebration of the 70th anniversary of the victory of the World Anti-Facist War in May, adding that Russia steadfastly supported China's efforts to uphold its core interests and the initiative proposed by Chinese President Xi to jointly build the Silk Road Economic Belt.

Putin also promised to strengthen overall cooperation with China, maintain close coordination in international affairs, and jointly deal with the challenges to the development of both countries and to world peace and security.

Wang said that in line with the principle of mutual respect and support, and common development through mutually beneficial cooperation, China and Russia are undertaking a successful practice in shaping a new type of international relations, which serve as useful experiences for major countries in conducting international cooperation.

To deal with the new challenges in global and regional situation, Wang said China and Russia should explore the links between China's Silk Road Economic Belt initiative and Russia's idea of creating a cross-Eurasia passage and integrating Eurasian economies, creating new platforms for cooperation.

He stressed the need to improve people-to-people exchanges and consolidate the social foundation of friendly interactions between peoples of both countries.

The Chinese top diplomat, who laid a wreath at the Tomb of Unknown Soldiers at the Red Square in downtown Moscow earlier in the day, called for taking the opportunity of celebrating the 70th anniversary of the victory of World War II to strengthen coordination in international affairs and uphold mutual interests.