While yoga’s longevity promoting effects have been the subject of legend for millennia, increasingly modern science is confirming this ancient technology for spiritual and physical well-being actually can slow aging and stimulate our regenerative potential.
Yoga has long been believed to be a life-extending practice, with yogis maintaining a level of strength and flexibility late into life far beyond what is considered normal or easily attainable in cultures that don’t practice yoga or related mind-body integrating disciplines.
I’ve written before about the many evidence-based health benefits of yoga, based on the primary literature abstracts on our database featuring an impressive 75+ health benefits associated with yogic practice. But I have not yet explored the anti-aging, or better said, longevity-promoting properties of yoga per se, which considering the increasingly aged population in the US and many other developed nations abroad, is highly relevant to the health care concerns of today.
It turns out that 2014 was a watershed year in proving the amazing potential of this at least 5,000 year old practice in helping to decelerate and in some cases reverse various age-related declines in body wide health.


One particularly powerful study published last year in the journal Age titled, “Age-related changes in cardiovascular system, autonomic functions, and levels of BDNF of healthy active males: role of yogic practice“, found that a brief yoga intervention (3 months) resulted in widespread improvements in cardiovascular and neurological function.
You can check out the details here:

Indian researchers studied healthy active males of three age groups (20-29, 30-39, and 40-49 years) by randomly assigning them to practice one hour of yoga daily for 3 months.
The observed significant differences between the younger and older participants in the study, specifically: “Significantly higher values of heart rate (HR), blood pressure (BP), load in heart (DoP), myocardial oxygen consumption (RPP), and total cholesterol (TC) were noted in senior age group.” The yogic practice resulted in significant reductions in all of these parameters (HR, BP, DoP, RPP and TC).
Also observed in the older participants were decreases in high frequency (HF), total power (TP), all time domain variables of heart rate variability (HRV), and skin conductance (SC) — all of which increased following yogic practice.
Higher levels of catecholamines (“stress hormones”) and low frequency (LF) power of HRV were noted in advancement of age, both of which decreased following yogic practice.
Additionally, the senior age group had highest levels of cortisol and adrenocorticotrophic hormone (ACTH), both of which decreased following yogic practice.
Finally, brain-derived neurotropic factor (BDNF), serotonin, and dopamine were low in higher age group, but these increased following yogic practice; an indication of improved brain function and cognition.
The researchers concluded: ‘This study revealed that yogic practices might help in the prevention of age-related degeneration by changing cardiometabolic risk factors, autonomic function, and BDNF in healthy male.”

This study, however, is not the first to show improvements in age-related physiological declines. 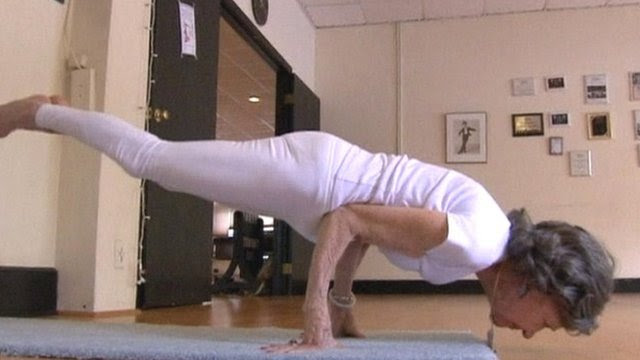 There are a number of promising studies revealing the age-defying potential of this ancient practice. Here are some additional benefits confirmed in 2014 alone:
This is just a small sampling of the literature. There is older research revealing that yoga has even more benefits for aging populations. We encourage our readers to go straight to the source itself: pubmed.gov and do some researching.
That said, yoga isn’t really about research, its about directly experiencing it and engaging in regular practice. We hope this article encourages those unfamiliar with the practice to give it a try and to reassure those who are already regular practitioners that they are indeed validated in their yoga efforts and experiences.
You can observe an example of yoga’s age-defying properties below in the video of Swami Yogananda Maharaji Ji, which at the time of his filming was 104 years of age:
Further articles by Sayer Ji:
About the author:

Sayer Ji is an author, educator, Steering Committee Member of the Global GMO-Free Coalition (GGFC), advisory board member of the National Health Federation, and the founder of GreenMedInfo.com – an open access, evidence-based resource supporting natural and integrative modalities. His writings have been published and referenced widely in print and online, including Truthout, Mercola.com, The Journal of Gluten Sensitivity, New York Times and The Well Being Journal.
In 1995 Sayer received a BA degree in Philosophy from Rutgers University, where he studied under the American philosopher Dr. Bruce W. Wilshire, with a focus on the philosophy of science. In 1996, following residency at the Zen Mountain Monastery in upstate New York, he embarked on a 5 year journey of service as a counsellor-teacher and wilderness therapy specialist for various organizations that serve underprivileged and/or adjudicated populations. Since 2003, Sayer has served as a patient advocate and an educator and consultant for the natural health and wellness field.
Visit GreenMedInfo online and on Facebook, or sign up for GreenMedInfo’s e-Newsletter.