Dr. Oz should be given a Congressional medal of some kind for his willingness to expose the truth about glyphosate on national television. In a recent episode that went viral, Dr. Oz discussed the toxicity of the biotech industry's favorite pesticide "glyphosate" -- a dangerous chemical that even the World Health Organization now admits likely causes cancer.


In response to this episode, the so-called "Monsanto Mafia" went berserk with all their usual character assassination tactics, and now they've come up with a contrived plot -- a campaign of intimidation and character smearing -- to try to silence Dr. Oz by destroying his credibility.
A letter signed by ten doctors -- all of whom have financial ties to industry -- calls for Columbia University to force Dr. Oz to resign from the university's Department of Surgery. This letter is a tremendously educational exhibit of the mafia tactics used by the biotech industry, as it essentially claims Dr. Oz has lost his mind and is now endangering the public. "Whatever the nature of his pathology, members of the public are being misled and endangered, which makes Dr. Oz's presence on the faculty of a prestigious medical institution unacceptable," the letter reads.
Of course, all the people who signed this letter have no qualms whatsoever with farmers spraying thousands of tons of cancer-causing glyphosate herbicide chemicals on all the foods we eat. That's perfectly acceptable to them and poses "no danger," they claim. It is Dr. Oz and his crazy, wild, irresponsible advice that people should eat wholesome foods and take charge of their own health that's now deemed a threat in this society... a society dominated by the financial interests of biotech and pharmaceutical corporations that profit from sickness and disease.
The real sickness, however, is found in the fact that these "Monsanto Mafia" operatives are given any credibility at all by the media. It doesn't take much poking around into their backgrounds to find out they're actually a gang of industry-funded junk science egomaniacs and hucksters.

The "Monsanto Mafia" is behind the attack on Dr. Oz

This plot to destroy Dr. Oz originates with all the usual "Monsanto Mafia" suspects such as Henry Miller, the indignant biotech puppet and Stanford biotech operative who helped run disinformation campaigns and fake science front operations for Big Tobacco. See the full details on Henry Miller here.
Also signing the attack letter against Dr. Oz was Dr. Gilbert Ross, executive director of the American Council on Science and Health -- a shady industry front group that spreads biotech disinformation and lies under the false label of "science."
Dr. Ross is a convicted criminal and Medicaid fraud artist. He was "convicted of racketeering, mail fraud and conspiracy," and was "sentenced to 47 months in jail, $40,000 in forfeiture and restitution of $612,855" in a scheme to defraud the Medicaid system, reports the U.S. Right to Know campaign in a page describing the ACSH's sleazy practices.
See the Sourcewatch entry on the ACSH here. Ralph Nader once described the ACSH as "...a consumer front organization for its business backers. It has seized the language and style of the existing consumer organizations, but its real purpose, you might say, is to glove the hand that feeds it."
The ACSH is pro-DDT, pro Agent Orange and loves asbestos. It promotes some of the most outlandish and mind-boggling quackery and junk science ever witnessed. From Sourcewatch.org:
ACSH calls the U.S. ban on DDT one of the 20 worst unfounded health scares of the 20th century. It ridicules the risks that chemical "endocrine disruptors" pose to human health and fertility. In addition to pesticides and chemical food additives, it has defended asbestos, Agent Orange and nuclear power. Whelan's nutritional advice has also raised eyebrows among health experts, many of whom take exception to her claims that there is "no such thing as 'junk food,' " and that "There is insufficient evidence of a relationship between diet and any disease.
The ACSH also solicited money from Big Tobacco to fund what it called opposition to the "pseudoscience" and "misinformation" in the media's claims that smoking cigarettes was bad for your health. As Sourcewatch.org explains:
In December, 1980 ACSH co-founder Stare wrote to tobacco giant Philip Morris seeking financial support. "We are a voice of scientific reason in a sea of pseudo science, exaggeration and misinformation. We believe it would be to your benefit to help ACSH," he wrote. Stare explained that the "basic" ACSH corporate benefactor membership was $3,000 "but we hope you will contribute $10,000 or more."

These are the very same people whose circles of "Monsanto Mafia" character assassins include Jon Entine, a former Forbes.com writer and American Enterprise Institute research fellow who also violently choked his wife in front of their daughter, according to the court documents linked below. Entine has ties to the American Council on Science and Health, and has even authored quack science publications for them such as a booklet called "Scared to Death" which claims atrazine is totally harmless. (All these biotech mafia operatives repeat the same lies over and over again, claiming agricultural chemicals are completely harmless.)
Here's what else Jon Entine, author for the ACSH, is known for doing:
- Physically attacked his wife Ellen Turner, "...became very belligerent and aggressive toward Plaintiff [his wife]. He pushed her, shoved her, gouged her eye, choked her and pushed her into the porch column. He slammed the door and refused to release [their daughter]. Plaintiff finally called the Indian Hill Rangers..."
SOURCE: Jon Entine public divorce document #12 and Jon Entine investigation Part One.
- Psychologically traumatized his own daughter in the process. "This occurred in the presence of [their daughter] who has been psychologically traumatized as a result. [Daughter] is afraid of [Jon Entine]... he has become increasingly and exceedingly hostile and belligerent. [The wife] fears that [Entine's] mental health has deteriorated..." (same source document as above)
- Was the subject of an urgent restraining order filed by his wife which ordered Jon Entine to refrain from "Physically, verbally and / or psychologically abusing, annoying, harassing or injuring [Ellen Turner] or the minor child of the parties...

- Engaged in child abuse / neglect / domestic violence according to a sworn statement by his wife, Ellen Turner. In the court document shown below, she pleaded with the courts to protect herself and her daughter from any further violence. The document was filed with Hamilton County Clerk Gregory Hartmann, Case # DR0500131: (bold added)
I have filed at 3109.27 Affidavit and have specifically addressed therein the child abuse / neglect / domestic violence physical harm provisions of O.R.C. 3109.04, 3109.051 and 3109.052 as those statutes pertain to both parents and this case.

SOURCE: Jon Entine public divorce document #23
- Was reportedly fired by ABC News for being "out of control" and saying "wild things." As reported in an earlier Natural News article:
ABC discovered Entine had made a number of mistakes in his methodology so serious that they had in effect fired him some ten days before. Entine, probably unknown to ABC, was however still picking up his messages from a phone on his old desk in the ABC building. We now understand from ABC sources that Entine is regarded as out of control and has been running around saying some wild things. SOURCE: Ivan Fallon, letter from Deputy Editor of The Sunday Times, October 8, 1993). 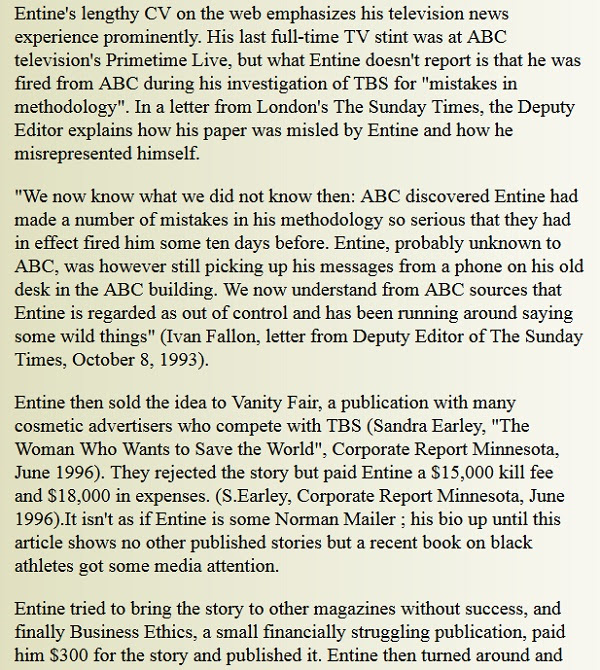 Attack on Dr. Oz is actually all about GMOs and glyphosate

The attack letter against Dr. Oz was actually based on Dr. Oz's coverage of glyphosate and GMOs. That's what enraged the "Monsanto Mafia" to push forward with an attempt to totally destroy the reputation of Dr. Oz.


It's the same tactic the industry has used against every activist, author, scientist, doctor and news publisher who questions the safety of GMOs and glyphosate. There are countless cases where publishers have also been threatened and intimidated into silence over their coverage of GMOs, glyphosate and the toxicity of Roundup herbicide.
The "Monsanto Mafia" has even infiltrated and taken over Wikipedia, turning it into a corporate-run disinfo site dominated by paid operatives who vandalize pages to support the profits of corporations like Monsanto. A new website called Wikipedia Warning is now calling for a Warning label to be placed on all Wikipedia pages to warn the public how the encyclopedia has been taken over by corporate operatives. A Kickstarter campaign also hopes to raise enough money to publish a book detailing Wikipedia's lies and disinfo attacks on the healing arts.
Jon Entine, by the way, was a key operative in vandalizing the Wikipedia pages of the GMO Seralini study. Under the user name "RunJonRun," Entine repeatedly vandalized pages to attack Seralini and discredit his scientific work which showed GMOs and glyphosate causing cancer tumors in rats. Entine tried to hide his identity but was eventually exposed.

What we are really seeing with this latest attack on Dr. Oz is not "science" but "racketeering." In fact, if any group in America should be arrested and tried under the RICO act, it's the biotech mafia and its network of paid-off scientists (like Henry Miller), disinfo operatives and character assassins (like Jon Entine). These racketeers have infiltrated the media (such as Forbes.com), non-profit groups (American Enterprise Institute), universities (George Mason University), Wikipedia, medical journals and a long list of other entities that wield influence in society. Their tactics include intimidation and threats, character assassination, buying off scientists, spreading wildly false information about anti-GMO activists, and even publishing the home addresses of targeted individuals who they hope will be killed.
The ACSH is at the center of all this, and the organization has on its board people like Dr. Paul Offit, the whacko vaccine fanatic who claims injecting pregnant women with aluminum is good for the developing fetus! Offit fits perfectly with the ACSH group of malicious chemical pushers whose actions condone the mass poisoning of the human population with deadly chemicals and toxic metals.
That's what all these junk science pushers seem to have in common: A sickening desire to see humanity poisoned with chemicals in food and medicine. As long as they are making money from it, they don't seem to mind all the rising rates of autism and cancer around the world. (Paul Offit makes money from the very same vaccines that are damaging and killing children.)

See the list of industry-funded quack "scientists" and sellouts who are attacking Dr. Oz

Here's the list of those who are trying to destroy Dr. Oz, all of whom have strong financial ties to the very industries threatened by anyone who tells the truth about disease prevention, toxic herbicides and self-healing with nutritional therapies.
This list should probably double as the 2015 Mafia Science Hall of Shame awards list:

Why You Can’t Trust the American Council on Science and Health:
http://usrtk.org/hall-of-shame/why-you-cant-...

Sourcewatch page on the ACSH:
http://www.sourcewatch.org/index.php/America...

ACSH takes money from Monsanto and other poison-pushing corporations:
http://www.cspinet.org/integrity/nonprofits/...