Who’s Protesting in Brazil and Why?

Don’t believe the right-wing media’s emphasis on corruption—the recent demonstrations are motivated by entrenched elite discontent over expanding economic and political inclusion for the nation’s majority.
Reading the English-language press these days, one could be forgiven for thinking that Brazil is in the throes of a democratic uprising against a singularly corrupt government, a politically incompetent president, and a floundering economy. Since late last year, the center-left Workers’ Party (PT) government headed by President Dilma Rousseff has been rocked by an ever-widening scandal involving over-inflated contracts and kickbacks to government-allied politicians at the state-owned oil giant Petrobrás. Indignant PT militants—rather than lamenting corruption in a party that once ran on its anti-corruption credentials—have tended to attack the media for highlighting PT corruption after ignoring abuses during the 1995-2002 administration of Fernando Henrique Cardoso, as well as similar scandals in state governments controlled by the opposition Party of Brazilian Social Democracy (PSDB).
In part due to the collapse of Petrobrás’s stock, down 67% since the start of September, the Brazilian currency has plunged nearly 40% against the dollar since then. Inflation over the last year has reached nearly 8%, the highest since 2005, inviting Brazilians to nervously recall the hyperinflation of the 1980s and early 1990s. On March 15, nationwide demonstrations organized on social media gathered anywhere from 300,000 to two million protesters in dozens of cities. They brandished signs saying, “Out with the PT!” and demanded Rousseff’s impeachment, although the one-time head of Petrobrás has not been implicated in the kickback scheme and can constitutionally only be impeached for crimes committed during her presidency. In the wake of the demonstrations, the percentage of Brazilians rating her government as “excellent” or “good” dropped to an abysmal 12%, while 64% rated it “poor” or “terrible.” This disapproval rating is the highest for any president since Fernando Collor de Mello’s 68% on the eve of his own impeachment for corruption in 1992. (Incidentally, Collor, now a government-allied senator, is one of 47 politicians currently under investigation for their role in the Petrobrás scandal.)


Foreign media outlets have seized on Rousseff’s supposedly lackluster response to the Petrobrás scandal and Brazil’s gloomy macroeconomic outlook to speculate whether the collapse of the PT’s economic and political model, which has relied on cautiously redistributive policies and moderately increased government involvement in the economy, is imminent. Their sense of hope is palpable: “Brazil’s poor turn their back on Rousseff,” one headline gleefully reported on March 16. Another article insisted that the protests’ “cheerfully democratic multitudes” sought contrition from Rousseff for her party’s graft and economic mismanagement, but that the President had so far ignored their indignation. An opinion piece in a British daily expressed hope that “popular dissatisfaction” would persuade Rousseff to take the steps needed to solve Brazil’s economic problems – a reduced role for state credit agencies, increased independence for Petrobrás and monetary authorities, tax reform, brakes on special interests, and increased openness to foreign trade. The New York Times added an editorial on March 20 blasting Rousseff’s foreign policy, which, it suggested, should draw closer to the United States – despite Edward Snowden’s revelations of NSA spying on Rousseff’s communications.
It’s no secret that most foreign correspondents are neither politically well connected nor fluent in Portuguese. Part of the explanation for their bias, then, comes from their dependence upon Brazil’s notoriously one-sided media, owned by a few elite families and corporate groups. The major newspapers are all staunchly anti-government, their reporting on Rousseff’s administration universally negative. The Globo television network dedicated much of its March 15 programming to recruiting attendees for what it called, “peaceful demonstrations against corruption, with women, the elderly, and children asking for democracy and out with Dilma.” Indeed, the Brazilian and foreign press are engaged in an endless echo chamber of self-validation: foreign journalists get their information from anti-government media outlets, which then breathlessly report the foreign “analysis” in order to validate their own bias. For example, a March 21 story in the Folha de S. Paulo and Veja reported favorably on the New York Times’foreign policy editorial. If foreigners say it, it must be true.
Perhaps the most notorious recent example of press bias occurred when Brian Winter, Reuters’ chief Brazil correspondent, interviewed Fernando Henrique Cardoso. Published in Portuguese by Reuters Brasil, the story contained a paragraph admitting that one of the Petrobrás officials involved in the corruption scheme claims that it dated to Cardoso’s administration. The paragraph was followed by a parenthetical note, apparently penned by one of the Brazilian editors, that accidentally remained undeleted: “We can take this part out if you want.” To his credit, Winter didn’t remove the paragraph, but the gaffe shows the inner-workings of the Brazilian branch of an American media outlet, where protecting the opposition and attacking the PT trumps even a casual relationship with the truth. Although the article was hastily corrected (without any indication that it had been modified), it was too late: attentive readers had already posted the gaffe to Twitter, under the hashtag #PodemosTirarSeAcharMelhor.
Amidst predictions of Rousseff’s demise, the mainstream media has consistently downplayed, and occasionally outright ignored, one fact: the social backgrounds of protesters. It is not “the Brazilian people” who are in the streets, but rather a very specific segment of the population whose economic interests are historically opposed to those of the majority. They are largely middle and upper class and, consequently, mainly white. In the 2014 elections they sensed that their time had come to get rid of the PT, only to see their favored candidate, former Minas Gerais PSDB governor Aécio Neves, lose in Brazil’s closest-ever presidential contest. Despite the very real and serious flaws of the current government, this discontent with the PT finds its true source in centuries of elite fear of popular mobilization and a deep resentment of the gains working class people have made since Lula took office in 2003.
Of course, if one asks the demonstrators in the streets why they are protesting, no one will say that it’s because the poor aren’t as poor anymore. Indeed, 44% of demonstrators in Porto Alegre told pollsters that they were attending to speak out against corruption. And, responding to a question that permitted multiple answers, 58% indicated that their greatest disappointment lies with the political class overall, as compared to 44% that identified the PT and 29% Rousseff. A further 78% argued that political parties, including the opposition, should have no role in their movement. Could it be the case that the demonstrations were, in fact, overwhelmingly democratic and targeted primarily at corruption? Several clues indicate that this is not the case.
Although they represented a small minority of demonstrators, a vocal contingent was not satisfied with calls for impeachment. In a chilling scene for those who remember the repression unleashed during Brazil’s 1964-1985 military dictatorship, protesters carried signs emblazoned with slogans like “Military intervention now” and “SOS Armed Forces.” A banner in Rio de Janeiro featured a swastika and read, “Armed Forces, liberate Brazil.” Another read (in English), “Army, Navy, and Air Force. Please save us once again of [sic] communism.” “The best communist is a dead communist. Dilma, Maduro, Hugo, Fidel, Cristina, Lula: the world’s garbage.” Their signs were eerily reminiscent of the media’s enthusiastic response to Brazil’s 1964 coup, when the country’s press overwhelmingly cheered the military’s ouster of João Goulart—another mildly-leftist, so-called “communist” president—as a victory for democracy. 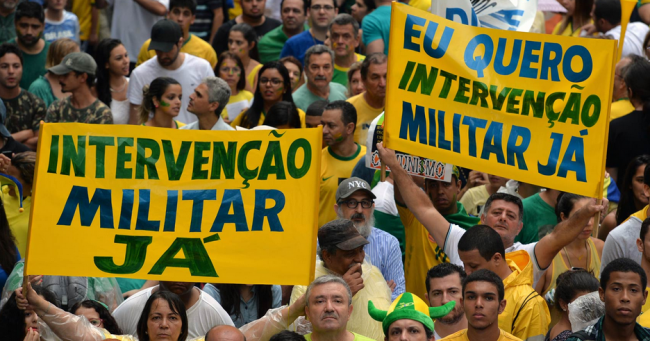 Figure 1: Protesters in São Paulo Plead for a Military Coup, March 15, 2015 (Source: Nelson Almeida / AFP)
In response to the pleas for military intervention, a spokesman for Revoltados ON LINE, a grassroots group that helped organize the protests and has 750,000 Facebook likes, commented, “The people asking for [military] intervention want to remove the PT from power. That is the sole focus. The participation of a variety of groups strengthens the group as a whole.” Though a military coup still looks unlikely, it is widely known that many in the military are incensed with the Rousseff administration over the final report of the National Truth Commission, which blasted the armed forces for torture and disappearances during its rule.
If those waxing nostalgic for dictatorships of yore were in the minority, what of the rest of the protesters? Despite attempts to highlight the supposed multi-class composition of the crowds on March 15, they represented, above all, Brazil’s white, university-educated economic elite. As Gianpaolo Baiocchi and Marcelo K. Silva recently pointed out, in Porto Alegre, nearly 70% of protesters were college-educated, in contrast with 11% of the general population, while over 40% belonged to the top income brackets, which make up but 3% of the population. Photographs confirm this; in a country with a high correlation between skin color and economic class, where over half of the population identifies as black or brown, the crowds had a decidedly lighter hue. A viral Tumblr accountpoked fun at the similarities with the upper-class, yellow-and-green-clad crowds that attended pricey World Cup matches last year by challenging visitors to determine if the photographs posted came from a March 15 demonstration or the World Cup. 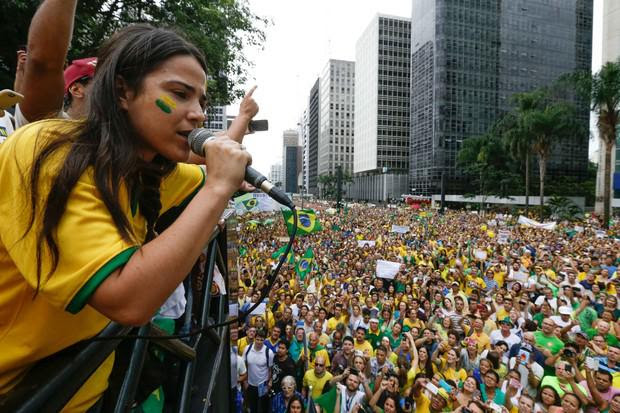